When I decided I wanted chickens, my friend Stephanie encouraged me and even dragged me with her to a poultry show. I came home with my first four chicks in a box. 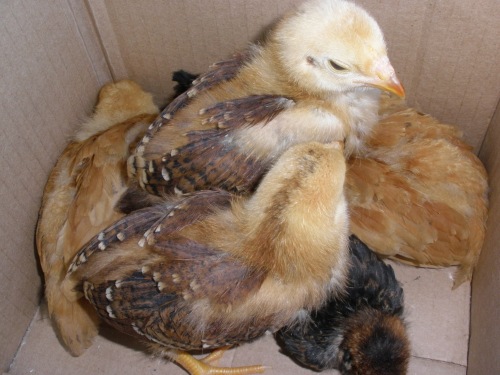 Molly weasley and her Peeps the day I brought them home.

I initially named them all after delicious chicken entrees so that the kids would remember that they could end up as dinner and not get too attached. As fate would have it, three of those first four chicks were roosters, and they did end up being three tasty dinners. One lonely hen survived that initial chicken run to be rechristened Molly Weasley. This evening, Gwen went out to the coop to feed the chickens one of their favorite treats, corn cobs with bits of sweet corn still attached. Sadly, she found Molly Weasley, still warm, laying deceased in the run.

I don’t know what her cause of death was. She hasn’t been behaving strangely and up until yesterday, she was still laying eggs. It seemed disrespectful to tinker with her carcass in search of an issue, so I buried her without probing for more information. Just in case  it was some sort of illness, I’ll keep an eye on the rest of my flock, but hopefully the rest of the girls are fine. For now, I’ll just take a moment to remember her on a happier day.