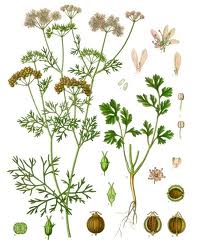 Oh, she may be pretty, but you can't trust her.

I’ll be the first to admit that cilantro is my nemesis.  Not in the good way either.  Not in the way that you want to use it but you’re not sure how and you experiment with it but can’t seem to conquer it and bend it to your will.  A challenge is always a good thing.  Flexibility makes you broaden your horizons and think about things in new ways.  Stretching yourself is good.  Cilantro, however is not good.

Cilantro is my nemesis in the full sense of the word.  According to Merriam-Webster, a nemesis is one who inflicts retribution or vengeance.  Cilantro was put on this earth to punish me.  For what, I do not know, but that it does I am sure.  I hate cilantro.  It tastes like soap.  And not good, homemade, bacon-soap either.  Something horrid and chemical-riddled like Irish Spring or Dial.  Cilantro has ruined more salsas and chutneys for me than I care to count.  Apparently I’m not the only one that hates cilantro; this blog: http://ihatecilantro.wordpress.com/ is devoted entirely to the loathing of the icky stuff.  So, when I saw that coriander was the spice of the month for the Spice Rack Challenge (Hm.  Maybe there is a marketing niche here: Spice of the Month Club, anyone?) I was distraught.  Coriander is unfortunately, the offspring of a cilantro plant.  Any food with genes as bad as cilantro’s can’t possibly turn out well.

I’ve purposely avoided coriander for years because I’m afraid of its fiendish lineage.   So, I put this challenge off as long as possible and then decided that something sweet might help mask the flavor that I assumed would be horrible.  Luckily for me, coriander isn’t nearly as wretched as her mother.  In fact, she’s actually quite pleasant.

I halved the recipe because I was afraid it would be horrible and noted other changes as well.

(The original recipe called for the spices to be toasted.  I did not toast mine so I can’t tell you if it is worth the time it takes to complete that step.) Preheat oven to 350°F(I baked mine in the middle and didn’t rotate.) Blend butter, sugar, vanilla, and salt with a rubber spatula. Whisk together flour and spices, then blend into butter mixture with spatula.   I just shmeared the batter into the bottom of a glass baking dish.  Bake, until edges are golden, 20 to 25 minutes. Cool on sheets 5 minutes, then transfer cookies to racks to cool.

While I wasn’t disgusted by the flavor, I have never understood the attraction to shortbread.  Sure, it’s easy and doesn’t taste terrible, but it’s typically dry.  And crumbly.  If I ever decide to bake cookies with coriander again I’ll probably try a nice sugar-cookie base.  Actually, a coriander-curry sugar cookie with a ginger frosting would probably be amazing.

I took pictures, but they were very un-exciting.  The golden color from the yellow curry didn’t really show and they just looked like plain shortbred squares so you’ll have to use your imagination.

I’ll admit I’m a  procrastinator.  I’ve always been that way.  I used to pull all-nighters to get my college papers done.  I could have paced myself like a reasonable human being, but that wouldn’t have been much fun.  So, as usual, my post is going up on the last day of the window.  At least it isn’t midnight.  Yet.

Add to the procrastination the fact that I didn’t even know what I was going to make until my lunch break this afternoon and you begin to get the full picture. I didn’t even find the recipe myself.   When I walked home for lunch I was grateful to see Mr. Hippie had googled some recipe choices.  (Is googled a proper verb???)  The first was a delicious-sounding Indian recipe.  I wanted to try it out but it required me purchasing (and taking the time to shop for) several spices we are currently out of.  And yes, I know I just dangled a preposition but, “spices of which we are currently out.”  just doesn’t sound right, now does it?  I also just started yet another sentence with a conjunction; DO NOT TELL MY THIRD GRADERS!!!  Indian chicken would have been nice, one of my 101 Things to do in 1001 Days is: 40. Make an Indian meal from scratch.  However, since as I have previously mentioned, I am a procrastinator and procrastinators do not have time to go gallivanting around town procuring spices at the last-minute.

Back to the point.  When I came home at lunchtime, Hubby also shared the recipe for Grandma Georgie’s Cardamom Rolls with me.  He knew I was working on a deadline and had even taken my time constraints into account.  I printed out a copy, wolfed down half my lunch and headed back to school.

Mine took exactly 12 minutes and made exactly 28 rolls as the recipe stated.

Verdict?  Excellent.  The texture of the rolls is perfect and the cardamom adds a subtle flavor.  The kids loved them.  Probably because of the 1 1/2 cups sugar.  We’ll definitely be making these again.  Next time I make them (with or without cardamom, because I think this is a great basic roll recipe) I will cut the sugar in half, but it could probably be reduced even more.  I’ve never made hot cross buns, but I think this recipe would make a great hot cross bun.

The only downside???  I used all the butter.  Don’t worry about me, Mr. Hippie already went to the store to buy another pound so that I won’t have to go without.

This morning Maggie asked about how the cake turned out.  So, here it is.

To be honest, not great.  But, it was my own fault.  The recipe is tried and true and came from a sitter Mr. Hippie and his brothers had when they were little.  He’s been baking it since he was old enough to cook with great success.  I however was in a hurry.  I rushed and didn’t give the cake enough time so the center wasn’t finished and of course, the cake collapsed.  My failure does not change the fact that this is a great recipe. It can be mixed in one bowl with minimal utensils and the result is a dense but not-too-rich chocolate cake.

Preheat oven to 350 degrees.
Combine all ingredients in a bowl.
Mix until well blended but do not over mix.
Pour into a greased 9×13″ baking dish.
Bake 30-35 minutes. (Or, more importantly until a toothpick inserted in the center comes out clean.)

My cake failed for any number of reasons:

Who knows.  Baking can be fickle.  The cake still tasted yummy even though it wasn’t pretty. 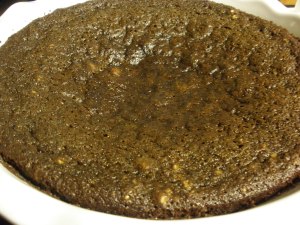 So this isn’t the fanciest cake, but that wasn’t the point.  Someone had a sweet tooth and cake was the cure.  After baking up this cake Mr. Hippie and I pondered why people buy cake mixes.  If you can bake a cake in one bowl and only dirty a couple of measuring cups and spoons, why bother with a mix?  It doesn’t take any longer and tastes way better. 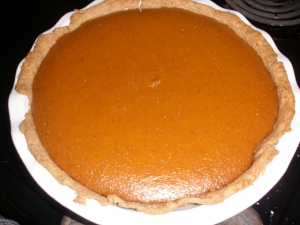 Adam loves pumpkin pie.  I myself prefer apple, but I am a good wife so I baked pumpkin.  I wanted this recipe to be Dark Days friendly, so even though I have canned pumpkin and  canned sweetened condensed milk, I used pumpkin from the freezer and local cream instead.

Combine flour, salt and butter in mixer.  Blend ’til crumbly.  Add chilled vodka* 1 T. at a time until mixture comes together in a ball.  Roll crust out on floured counter and place in pie plate.

Whisk together all ingredients until smooth.
Pour into prepared pie crust.
Bake at 425 for 15 minutes.
Turn oven down to 350.
Bake at 350 for 45 minutes.

Let pie rest for at least 2 hours before serving. 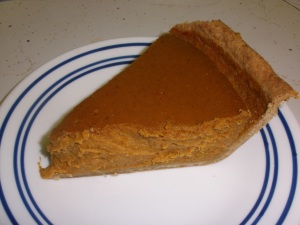 The pie baked up really nicely.  It stayed light and wasn’t too shallow for my deep pie pan.  The slices kept their shape and everyone seems to like it.  Bubba commented that it was too sweet so I think I will reduce the sugar next time but it is really delicious.  And no, you can’t taste the vodka in the crust.

* I used Stolichnaya Vodka.  No, it isn’t local.  Yes, we have a local distillery.  Someday I will try our local vodka, but I am loyal to Stoli.

#39 ~ Bake Something Every Week: Better than Tollhouse(R) Chocolate Chip Cookies 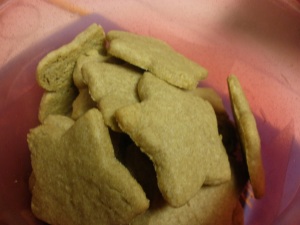 Not gramma's, but not bad.

Last week I baked sugar cookies.  I don’t remember which recipe I used, but they weren’t spectacular, so not share-worthy.  When I find my Grandmother’s recipe maybe I’ll share.

I also baked pasties but I haven’t decided if that really counts as baking.  They were also not very spectacular.  I used leftover beef tenderloin, rutabaga, carrot and potato chunks and then sliced in a little cheese for good measure.  Pasties are good because you can individualize them.  Gwen’s pasties were meatless and Dylan’s were potato-less.  Adam doesn’t love rutabaga so I didn’t put as much rutabaga in his.  Since I was pressed for time I used straight-up pie crust instead of croissant dough like I usually do.  If you need a recipe for pasties I have one here.

This week I baked enchiladas from a new recipe, and chocolate chip cookies.  Essentially I use the recipe from the back of the Nestle bag, but I have modified it.  And yes, it actually is better.

In mixer cream together melted butter and sugars.
Add eggs one at a time mixing after each addition.
Add vanilla.  I probably use more than a tablespoon because I just dump it in. 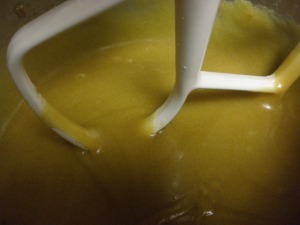 Melted butter yields a smoother base.

Add salt and soda to flour.  Add slowly to egg mixture and blend until combined.
Mix in chocolate chips stirring until blended.

Refrigerate for an hour. 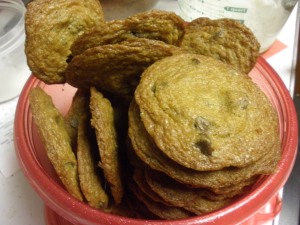