First, if you’ve never been to this blog before, let me make one thing perfectly clear. I am not a vegan or a vegetarian. I eat eggs. I raise chickens just so that I can have good, quality eggs at my disposal. However, we’re smack in the middle of winter. Even worse, we’re smack in the middle of some awful polar vortex that made its way here from the Arctic and won’t leave. If you’re not familiar with chickens, you probably don’t know that when the daylight starts to wane, so does their egg production. Add to that the fact the we’re down to three hens and Luna’s production has slowed anyway as she reaches her fourth spring. We haven’t had an egg here since October!!
So, I’ve been forced to go to the co-op or farmers’ market to keep eggs in the house. Which is fine, but um, we’re trying not to spend all our money on groceries and egg and sausage biscuit sandwiches are on this week’s dinner menu and I didn’t want to use them all up and have to buy more. 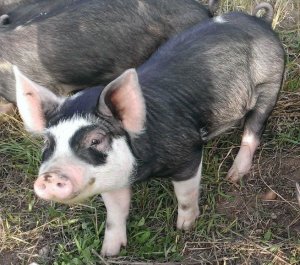 So, the bunch of bananas getting browner by the day was screaming at me. I could have peeled the bananas and put them into one of the freezers, but I’m trying to empty them enough to make space for the hog we’re getting from Quartz Farm as soon as he’s big enough.

Banana bread is the best way I know to use up sad, old bananas. All my recipes called for eggs. I Googled egg-less banana bread and got 2 or 3 different recipes that were all basically the same. I then searched for egg substitutes. My search returned the usual, “applesauce, banana, flax seed or oil”.

I ran through the options in my mind and decided against all of them because: I’m already putting 6 bananas in the recipe, I don’t think I should substitute one for the eggs; banana bread already has a lot of butter or oil, so I didn’t want to add any more; all my applesauce is flavored and I don’t want to add any more fruit to my bread; and finally, I don’t have any flax seed. But, there was another egg substitute that intrigued me, for each egg, mix:

I have oil, water and baking powder in my house, so I decided to give it a go.

Banana bread recipes are essentially the same. Oh, of course you can add chocolate chips, or sprinkle some sort of topping on your loaves  but they all boil down to the same thing. Bananas, flour, sugar and a few other key  ingredients in similar proportions across the board. Well, except for that whole egg thing.

Have I mentioned that I’m a math geek? Sometimes when I can’t decide on which recipe to use, I like to play the game of averages. Do you remember averages from school? Or maybe, like me, you actually still use them in your adult life? Add up the values of a given thing and then divide by the number of given things you started with. It’s pretty easy actually, but the nerd in me loves it.

(If you’re screaming in your head, “Just get to the recipe already!” Click here for a printable version or scroll down to the pictures and please accept my apology for rambling.)

I start with a table. I list all the ingredients down the side and then across the rows I write in the volume of that ingredient in the various recipes. Once the table is complete, I calculate the average amount of each ingredient, round it to the nearest measurable amount and then use that number as the amount in my recipe.
For example, sugar. I had six recipes. The sugar called for in those six recipes was: 1 cup, 1 cup, 1 cup, 2/3 cup, 3/4 cup and 2/3 cup. I added all the sugar amounts together and divided by six to get 0.74 cups and then rounded it up to 3/4. Sound tedious? It actually brings me a great deal of joy that I can’t quite explain. Oooh! Oooh! Plus, I doubled the recipe; more math!

When I was all done with the math for my recipe, I added in a few ingredients of my own. One of my original recipes called for milk, one for sour cream, and one for cream cheese. When those ingredients were averaged in, they didn’t account for much of the total recipe, so they weren’t included. Except, I happened to have a half a container of sour cream in the fridge. I myself am not a fan of sour cream, but I needed it for a recipe so I decided to go ahead and add sour cream after all so that I could use it up before it spoiled. And, I added WAY more vanilla than the averages called for. Plus, cinnamon. It wasn’t in any of the recipes and I just felt like putting it in.

The batter was really thick and I thought I was going to end up with a dry bread (which I hate) but I’m quite pleased with how the loaf came out. It was very moist, had a nice flavor and if I have sour cream in the refrigerator again I could probably be persuaded to make another batch.

When everything was said and done, I ended up with this:

To make Egg-less Banana bread,
preheat your oven to 350°.

Add butter and brown sugar to the mixing bowl. 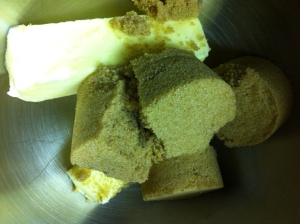 Cream butter and sugar together.

Mix well and add sour cream and vanilla. Mix until combined and add bananas. My math said 5 1/2 but I had 6 so I used all of them. I also didn’t mash the bananas before I put them in; I broke chunks off into the mixer and then just beat the snot out of them until they looked like this.

Measure the dry ingredients into a separate bowl or 1 quart measuring cup.

Grease a 9″ x 13″ baking dish or two loaf pans. Spread the batter into your pan(s) and bake at 350° for 45-55 minutes. Bread is finished when toothpick inserted in the center comes out clean.

In a separate container combine dry ingredients. Add a little at a time, mixing after each addition.

Pour batter into pan(s). Batter will be quite thick and may require spreading with a spatula.

Bread is finished when toothpick inserted in center comes out clean.